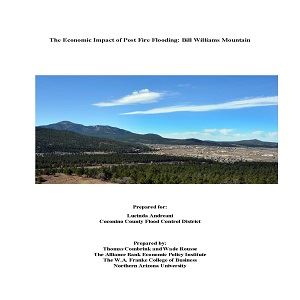 The first 300 acres of this restoration project were successfully completed at the end of 2020. Phase 2 is employing many of the same techniques that were used in Phase 1, including utilizing helicopters and timber fellers to cut and remove standing trees as well as dead and down trees.

The goal is to finish Phase 2 this year before snow season. When completed, approximately 40% of the 1,200 acres of steep slopes identified on Bill Williams Mountain will have been treated. There are approximately 725 additional acres on the steep slopes identified for future treatment as the next phases of this project move forward. Active restoration efforts will continue on the lower, more accessible areas of the mountain that will include timber sale contracts as well as hand thinning and piling projects. The goal is to complete as much of this remaining acreage as possible with future steep-slope treatment projects.

In addition to mitigating the estimated $365 - $700 million economic threat of wildfire and post-wildfire flooding, the goal of these treatments remains the protection of the citizens, water sources and reservoirs, and critical infrastructure of the City of Williams.