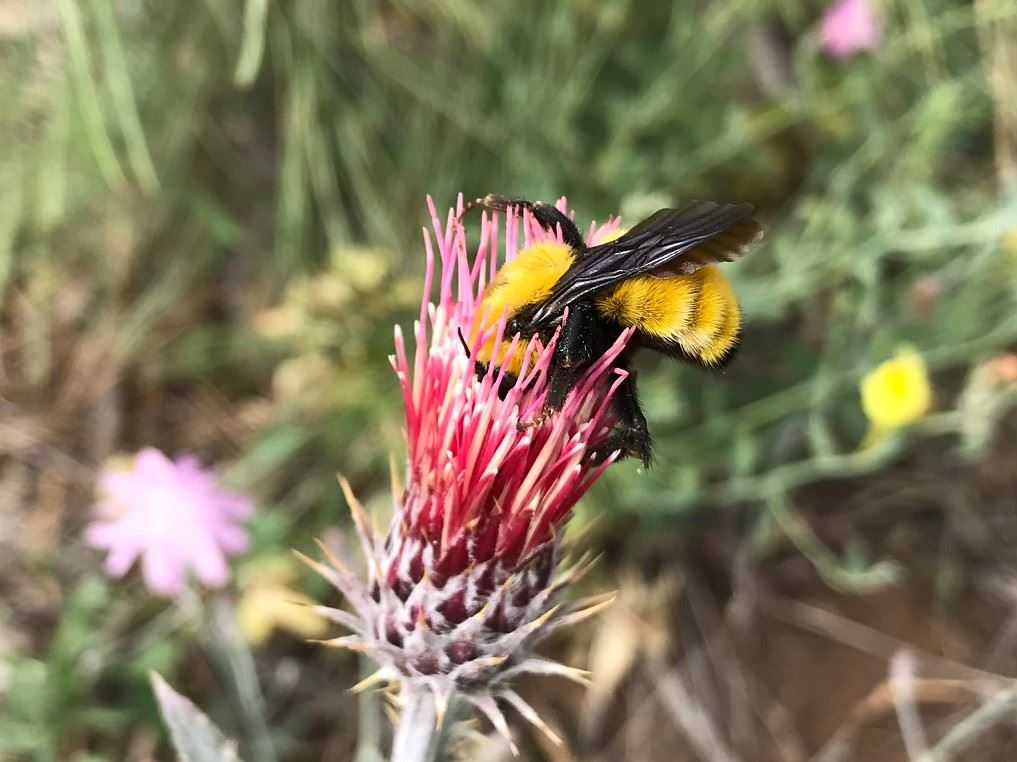 There are at least 369 species of native bees in the greater San Francisco Peaks area. As very active pollinators, they make it possible for a great many different native plants to thrive here.

Bees primarily consume pollen and honey. They descended about 125 million years ago from wasps, which are a carnivorous species. Bees co-evolved with the first flowering plants, which appeared at that time. Bees feed on flower nectar for energy and collect pollen to provide their larvae with protein and other nutrients. In the process of collecting pollen, bees transfer some of it from one flower to another, enabling flowers to produce the seeds from which future generations will bloom. Individual native bees are two to three times more effective as pollinators than a honeybee. Honeybees were imported from Europe and are not native to the Americas.

Bees are the ultimate pollinators. As they fly, their fur becomes charged with static electricity that attracts pollen from flowers, which sticks to the bees even before they reach the flower. Bee buzzing shakes pollen loose from certain flowers that can't release it without that buzzing. And bee vibrations don't stop there. Israeli scientists found that within minutes of sensing vibrations from bee wings, a species of evening primrose temporarily increased the concentration of sugar in its nectar, attracting even more insects. The researchers found that pollinators were nine times more common around plants that another pollinator had visited within the previous six minutes. Bowl-shaped evening primroses also increased their own vibrations in response to the bees. This study launched a new field of research called phytoacoustics: the study of sound perception in plants. 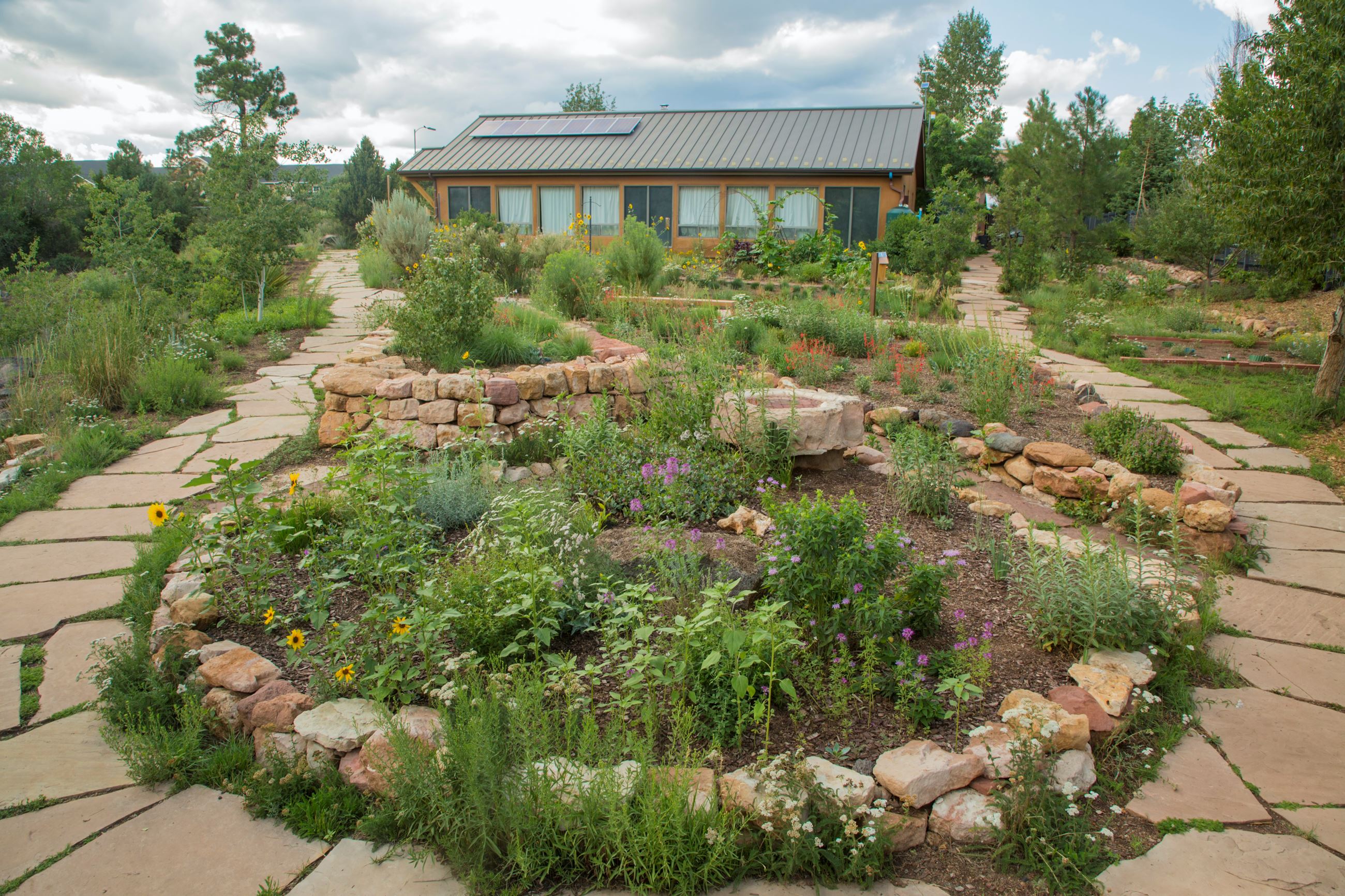 Bees have five eyes! Three simple eyes (ocelli) on the tops of their heads detect polarized light, which allows them to navigate by the sun even on cloudy days, and to sense the approach of predators from above. The two large eyes on either side of their heads, called compound eyes, are made up of thousands of tiny eyes with lenses called facets, which together perceive blue, green, ultraviolet, and the shape of objects. Compound eyes focus poorly from a distance but very well up close. They have a much wider view than human eyes, as wide as 280 degrees.

Bees can't see the color red, but they can see ultraviolet. Ultraviolet patterns that attract bees to flowers are invisible to humans. To us, a common sunflower is a simple arrangement of yellow rays encircling a dark disk. A bee sees a brilliant ultraviolet bull's-eye on the lower part of the rays near the center of the flower.

Except for bumblebees, Northern Arizona's native bees are solitary. Without a hive to defend, they very rarely sting. They can forage in temperatures 10˚ cooler than honeybees. At night, males sleep in flowers, on plant stems, or under leaves. Females usually return to their nests, which are tunnels in bare ground, or small holes or crevices in wood or stone. Some females lay their eggs in the hollow stems of dried wildflowers in the fall. Northern Arizona's native bees feed on nectar but do not produce honey. Some are specialists, meaning they forage only on a certain species of plant or family of plants. Because bees only live for weeks, specialist bees develop into adults at the same time their particular flowers bloom.

Native bees vary in size. Tiny bee species do not grow up to be large bees. Like other insects, bees go through stages of development. They hatch from eggs into wormlike larvae. Eventually, the larvae undergo metamorphosis—the complete reorganization of their tissues—into adult bees with eyes, wings, and hair. Depending on the species, native bees can be very colorful. Some are metallic blue or green while others have red, yellow, orange, and/or white stripes. Sweat bees may be blue, copper, or gold; some other native bees are simply dark brown or black.

Bumblebees are round and furry, often with bands of color that warn off potential predators (they can sting but usually ignore humans). They live with a single queen in small, seasonal colonies in the ground or sometimes, in rodent burrows, holes in trees, or under wood. Females have a bare area on their hind legs with a fringe of hairs called a pollen basket which, not surprisingly, carries pollen. Bumblebees sip nectar using their long, hairy tongues, and make a small amount of honey for the young in their colonies. At the end of summer, only the queen survives. She hibernates through winter and then lays eggs for a new colony.

Click to watch an astonishing video about the diversity and behavior of native bees in one small English garden. 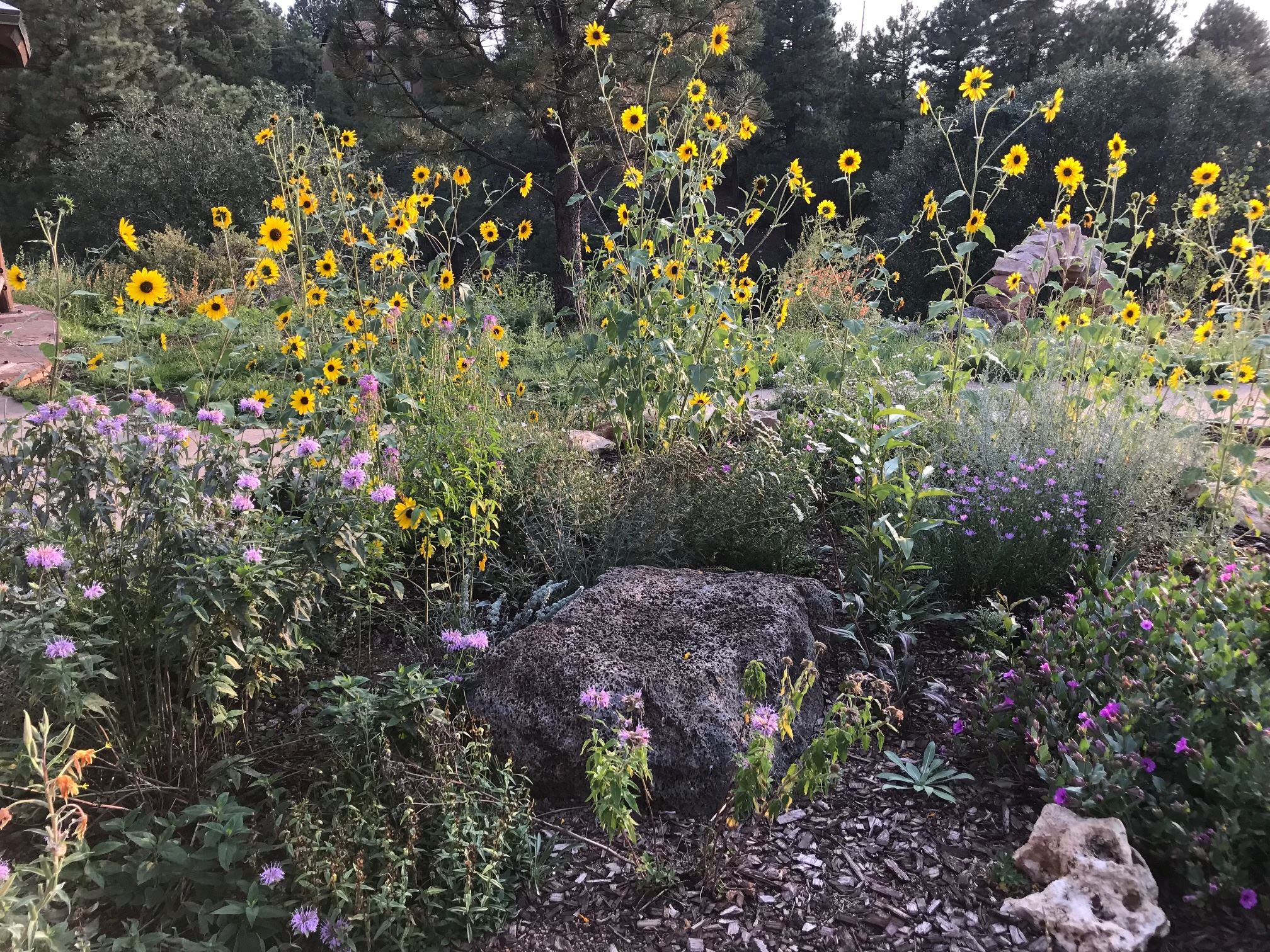