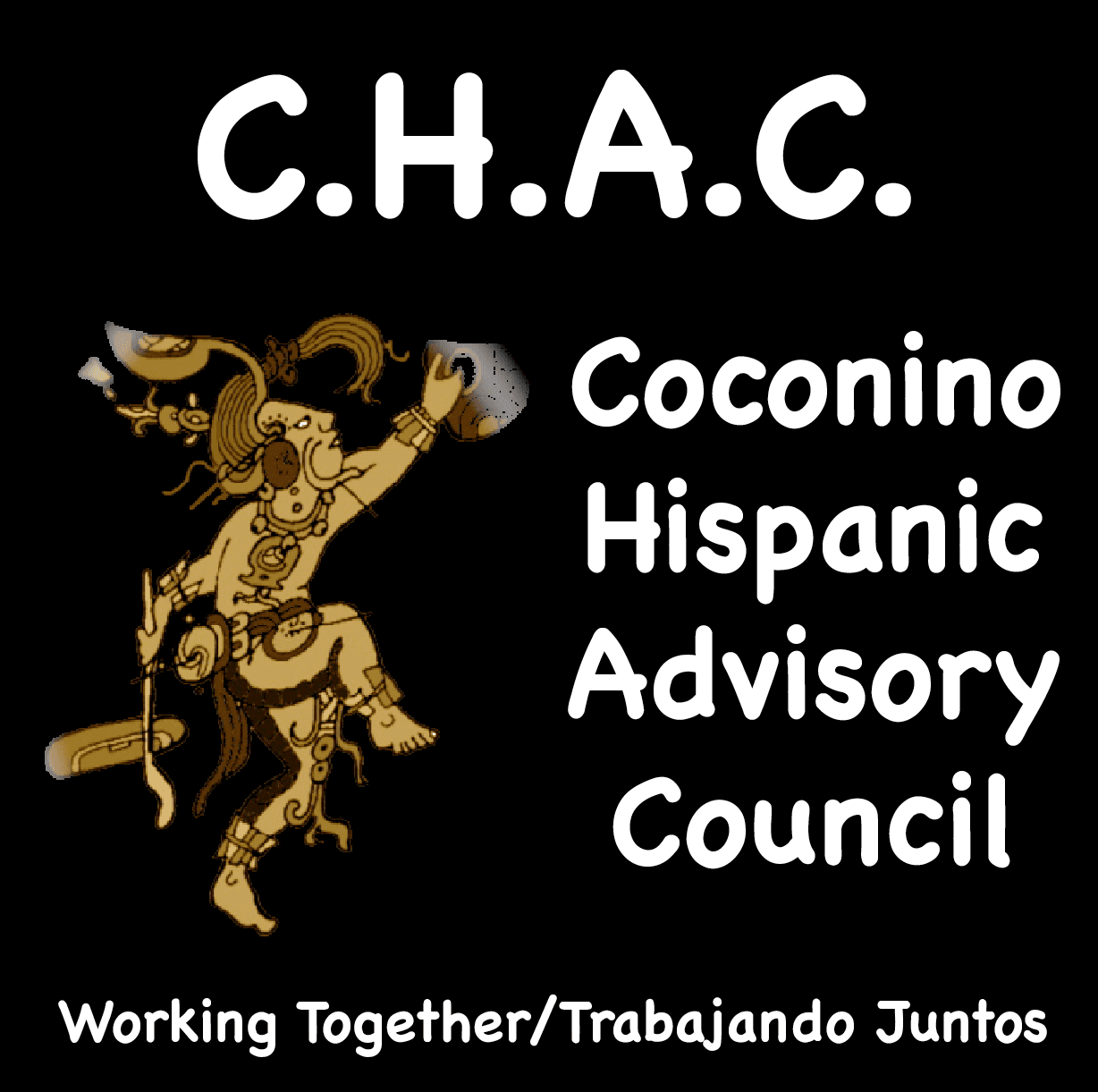 CHAC presented its 2020 Cesar E. Chavez Community Recognition Award to Vietnam veterans at the American Legion Post 3 in Flagstaff on April 10, 2021. The presentation was delayed in 2020 due to the COVID-19 pandemic.

The award will now remain on display at the post. Attending the presentation were CHAC Chair John Haro, and former chairs Ruth Eaton and Frank X. Moraga. 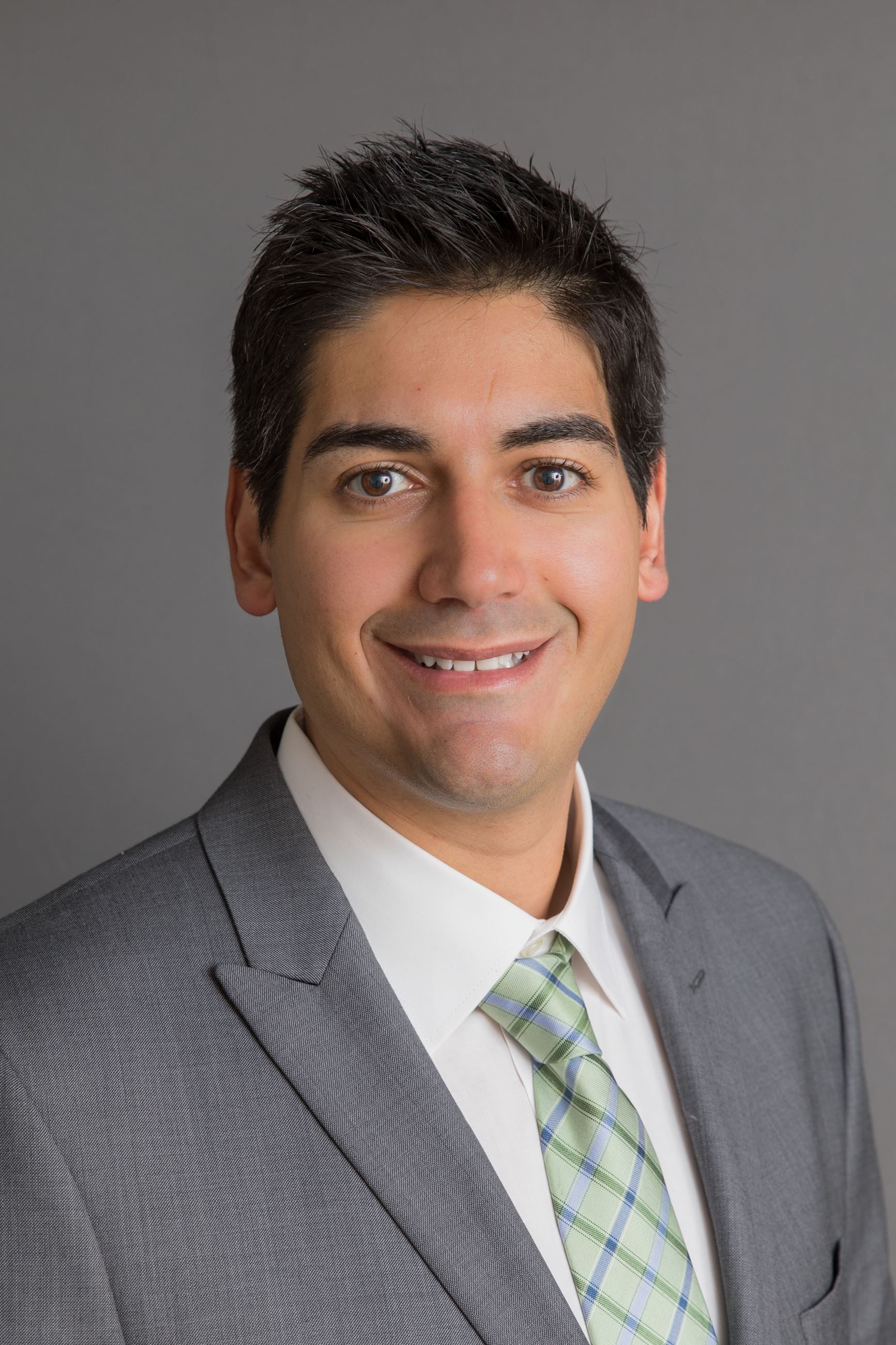 José Díaz Aquino is currently the Assistant Director for Career Programming at the Northern Arizona University (NAU) Career Development office. He is a Higher Education Professional with 4+ years’ experience in enrollment management, admissions, and career development and 9+ years’ experience in consumer goods manufacturing and recruiting. He has a unique background as a Chemical Engineer with global experience working across three different countries (US, Mexico, and Australia) and in multiple manufacturing locations and platforms that has allowed him to develop a proven ability to deliver impactful work through the combination of functional expertise, interpersonal skills, and an agile, strategic approach. His previous experience includes working in companies such as General Mills, Proctor and Gamble, and Merck, Sharp & Dohme, as well as having the opportunity to conduct research at the University of Notre Dame and his alma mater, the University of Puerto Rico. After deciding to explore a new career path at the age of 31, he completed his Master of Education degree with a focus on Educational Leadership, which combined with his experience gained in admissions and enrollment management has opened the world of higher education and student affairs. It has also given him the opportunity to become an Instructor at NAU for the First Year Experience department helping students learn about and apply transition theory and design thinking concepts as they begin their college journey. The intersections of equity and access, career development and exploration, and STEM education are some of Jose’s interest areas. Jose is married to his amazing wife, Marcela, and they are so blessed to have a 13 month old at home (Andrés Sebastián) who is teaching them new things every day! 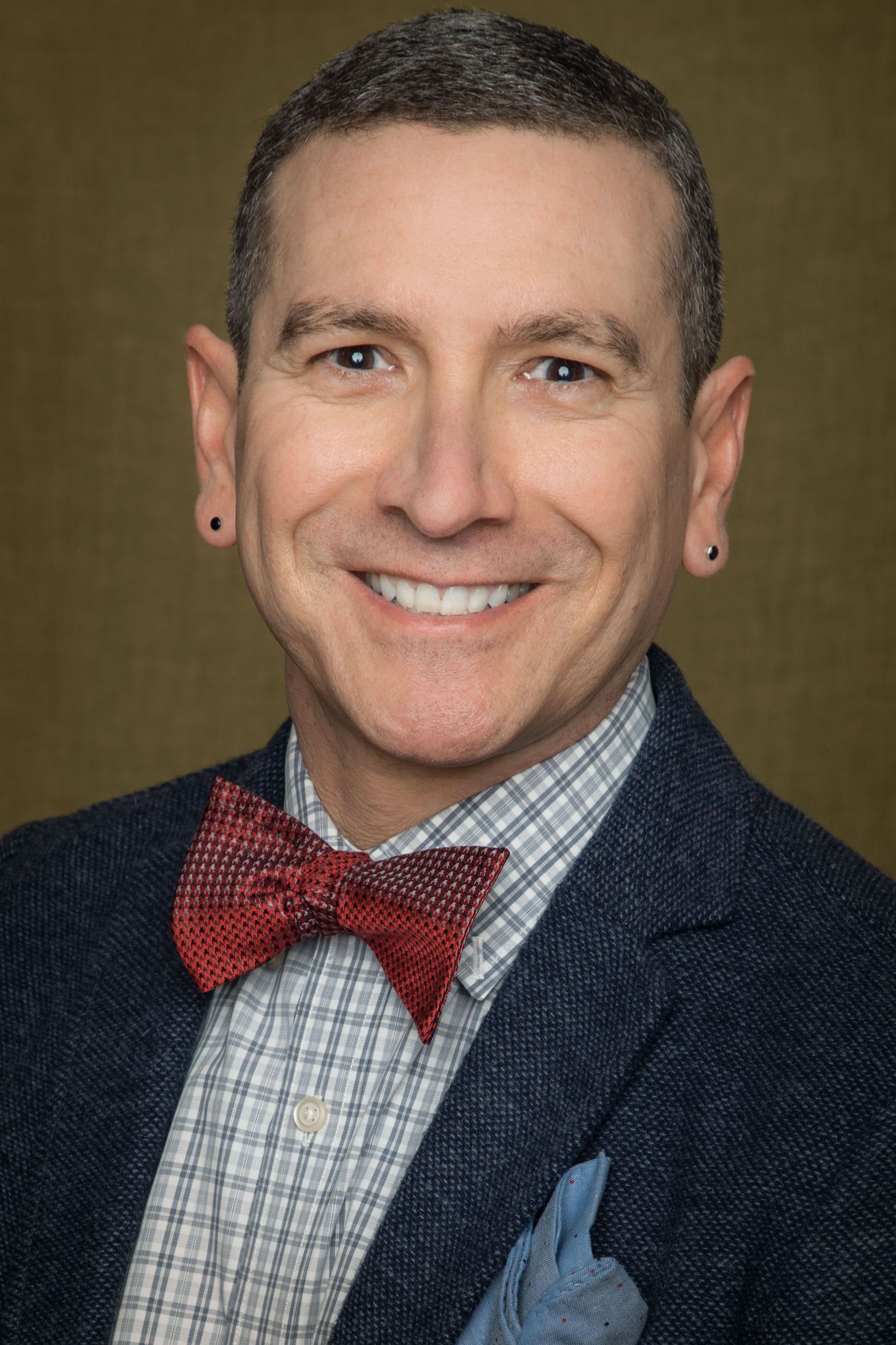 J Michael Cruz is the Director of Operations for North Country HealthCare. He is a Texas native and graduate of Texas Woman’s University (PhD, Sociology, 2001) and University of North Texas (MA, Sociology, 1996). Michael’s professional experience began in higher education as a Sociology Professor in Portland, Maine at the University of Southern Maine, and then at Southern Methodist University in Dallas, Tx. Michael taught very applied Sociology courses and required community engagement and service learning of his students. Leaving higher education in 2013 to join the non-profit sector full-time was thus, a natural career progression for him. Michael has worked for Resource Center Dallas- an LGBT nonprofit service organization, The Suder Foundation, and Prism Health North Texas in Dallas, where he started working in public health (2016). Michael came to Flagstaff in the Fall of 2018 to follow his partner and is excited to have found his local community in the Coconino Hispanic Advisory Council. 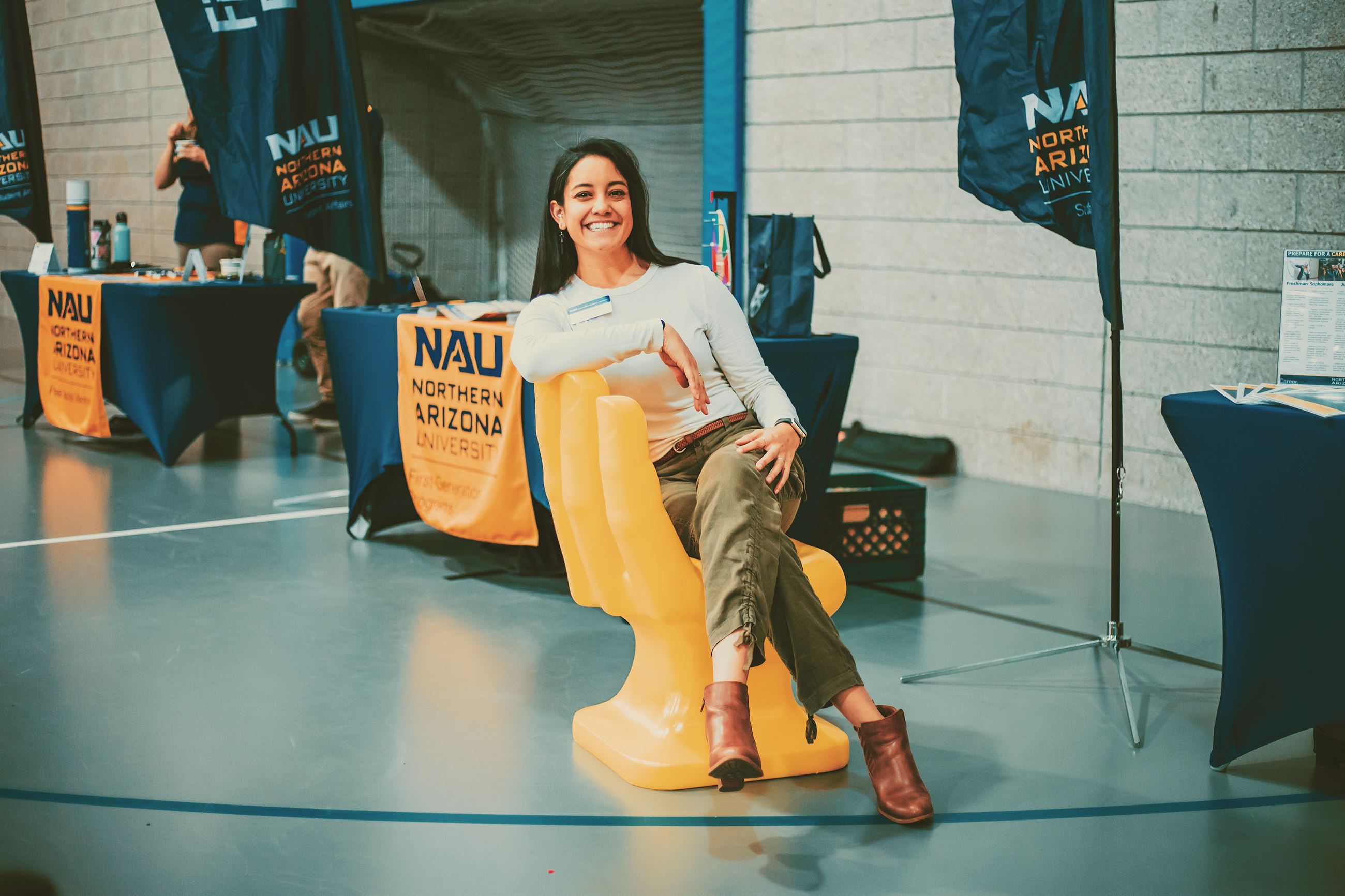 A third-generation Flagstaff local, and a daughter to two Northern Arizona University (NAU) alumni, pursuing post-secondary education with NAU seemed a natural decision in her college-bound journey. Dani Donaldson changed majors five times throughout her academic career, experienced first-hand the many challenges that face college students, and did much experiential learning in the way of navigating the nuances of higher education. In an effort to help guide other students through the process, she has found her fit within enrollment management and student affairs and currently works as an Assistant Director with the NAU Admissions team.

Since graduating with her B.A. in Anthropology in 2011, she has been a contributing alumna within the Northern Arizona University community both in her work and in her spare time. In 2016, she completed her M. Ed. in Educational Leadership, creating an educational background that allows her passions of education and people to collide. At the end of the day, Dani is an advocate for promoting educational equity, access, and excellence for all students. She has been a member of CHAC since Feb 2020.

Ruth Eaton, M. Ed., is of Mexican Ancestry, a Flagstaff resident, and retiree of Catholic Charities in Phoenix, Arizona. Ruth is an advocate for legislative change and for Latino and Human Rights. She serves as a Community Volunteer for CHAC and past CHAC Chair and Co-Chair, volunteer for Coconino County Employee Appeals Board, volunteered for NAU Hispanic Convocation prior to COVID-19. She is a current member of NALEO- National Association of Latino Elected & Appointed Officials and the statewide Hispanic Leadership Institute West.

Ruth also served in community service and leadership roles in Maricopa County. She served on Catholic Charities Ethics Committee, served on 2003 Education Subcommittee of the Governor’s Advisory Commission on Child Protective Services Reform. Ruth’s past career fields are inclusive of College Instruction, Administration, Management, and as a Federal Consultant. Her greatest past experience was volunteering and collaborating in community partnerships with child protective services. Ruth holds the belief that Latino Leaders have an ancestral responsibility to build new Latinx Leadership by mentoring, connecting and volunteering in the community.

John Haro is the Chair of the Coconino County Hispanic Advisory Council and was originally appointed to CHAC in 2019. In his work life, he serves as the Northeast Division Director in the Transmission & Distribution organization at Arizona Public Service. John leads the team responsible for providing safe, reliable energy in APS’ Northeast Division. His specific responsibilities include the operation, maintenance, emergent response, design and construction of the distribution system serving parts of Coconino, Navajo, Yavapai and Gila counties.

During his 34-plus year career, John has earned the opportunity to hold various frontline and leadership positions throughout APS. After beginning his career in the mailroom, John completed an APS Journeyman Lineman apprenticeship and worked for 16 years in the line trade before being promoted into leadership.

2010-2012, John led the Operations and Maintenance team in Surprise Az. In 2012, he was chosen to lead the Energy Control Center where he directed and led the grid operations team for APS’ service territory and oversaw the interconnected EHV (extra high voltage) grid within the southwest region. In 2014, he was promoted to Senior Manager of Transmission Maintenance and in October of 2016, John was awarded the Northeast Division Director position headquartered in Flagstaff.

John also serves on the Board of Trustees for the Museum of Northern Arizona. John and Laurie Haro have four beautiful children and one granddaughter. John enjoys leadership/personal development, arts, wood working, sports, the outdoors and spending time with family. John is also a proud Marine, having served four years in the USMC Reserves. Semper Fi. 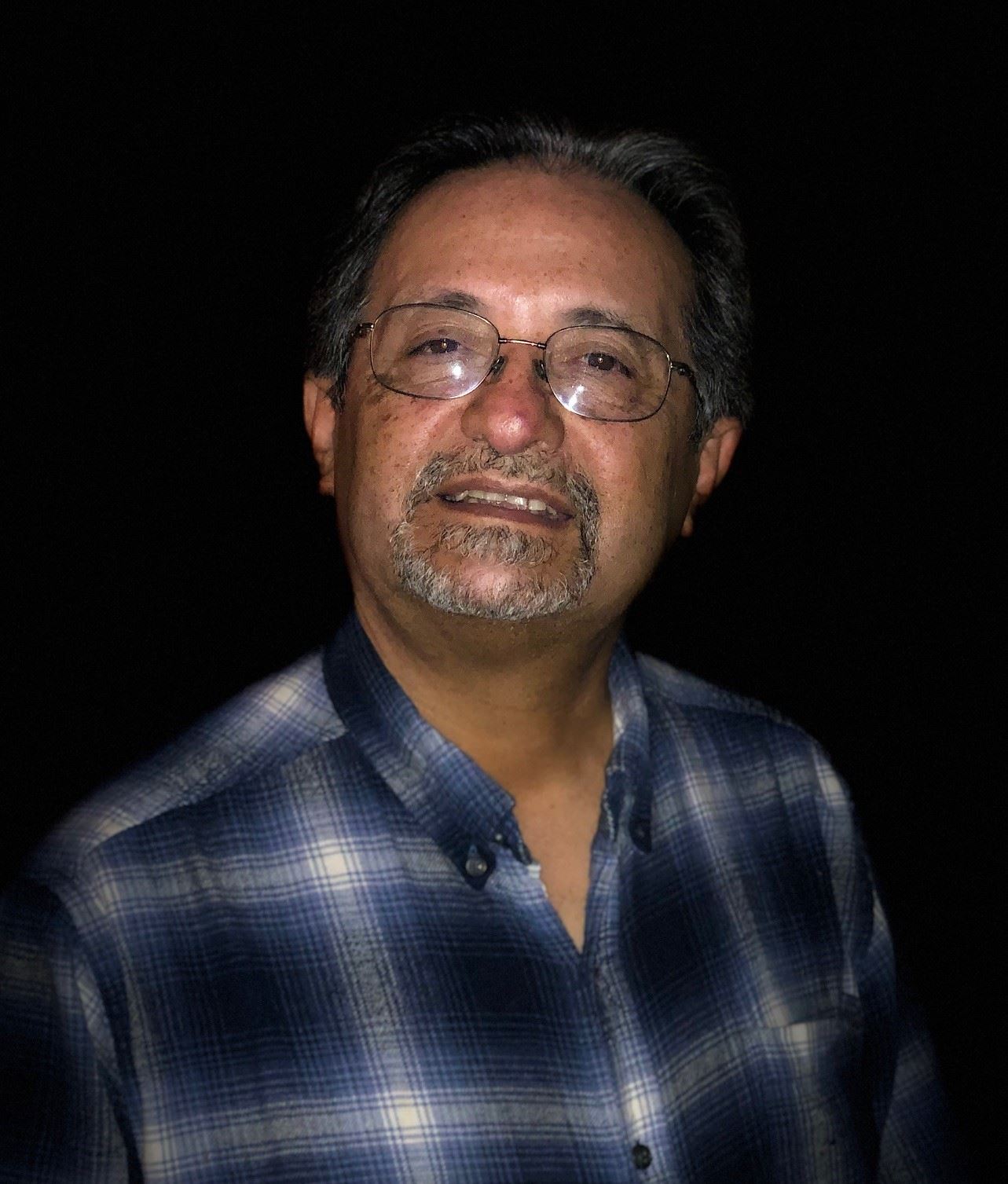 Frank X. Moraga uses his journalism background to build bridges between a wide variety of people and cultures in Northern Arizona.

He is the editor and publisher of www.AmigosNAZ.com, which provides information for and about the vibrant Latino community in Northern Arizona. He is also the outreach coordinator for the Coconino Coalition for Children & Youth, which works with more than 100 partners to promote the education, health and welfare of children and youth in Northern Arizona.

Frank is a U.S. Navy veteran and earned a Bachelor of Arts degree in print journalism and history, with a focus on Latin American history, from California State University, Long Beach.

Frank has received numerous awards in more than 20 years’ experience in journalism and community relations.

He has served as chair of the Coconino Hispanic Advisory Council (CHAC), a member of Flagstaff Nuestras Raíces and a founding member of the Flagstaff Police Department Citizens Liaison Committee.

Miguel Vasquez, Ph. D., Professor of Anthropology (Emeritus) Northern Arizona University. Miguel, a native of San Francisco, is a recently retired applied anthropologist who has worked with Latino, Mayan, Native American, African American, and disabled adult communities for almost 50 years. He has been recognized as an NAU President’s Distinguished Teaching Fellow. In his 32 years at NAU, he taught nearly 12,000 students at the undergraduate and graduate levels.

With extensive experience working with farmworkers in California, the Hopi Tribe here in Arizona, in Mayan communities in Guatemala and Mexico, and as consultant with the U.S. Department of Health &Human Services, he has provided valuable cultural insights and technical assistance in community engagement, asset based community development, and program assessment.

He was a contributor to the World Health Organization Spanish-Language Manual on Disabilities, a past Board Member of the Society for Applied Anthropology, the Flagstaff Unified School District, the Museum of Northern Arizona, and a longtime member of the Coconino Hispanic Advisory Council. He has been married for 45 years to Marina Vasquez, a Mayan elder (now retired) with the NAU Native American Cultural Center. They have 2 sons, Jeronimo and Francisco, and 7 wonderful grandchildren. Jeronimo was recently appointed to the County Board of Supervisors.

The council is composed of volunteer members appointed by the Board of Supervisors. Members must reside in Coconino County. Members should also have an interest in the cultural events, achievements and concerns present in the Latino communities.

The Terms of members of the Council shall be four (4) years, without term limits. An appointment for a vacant position shall be for the unexpired portion of the term.