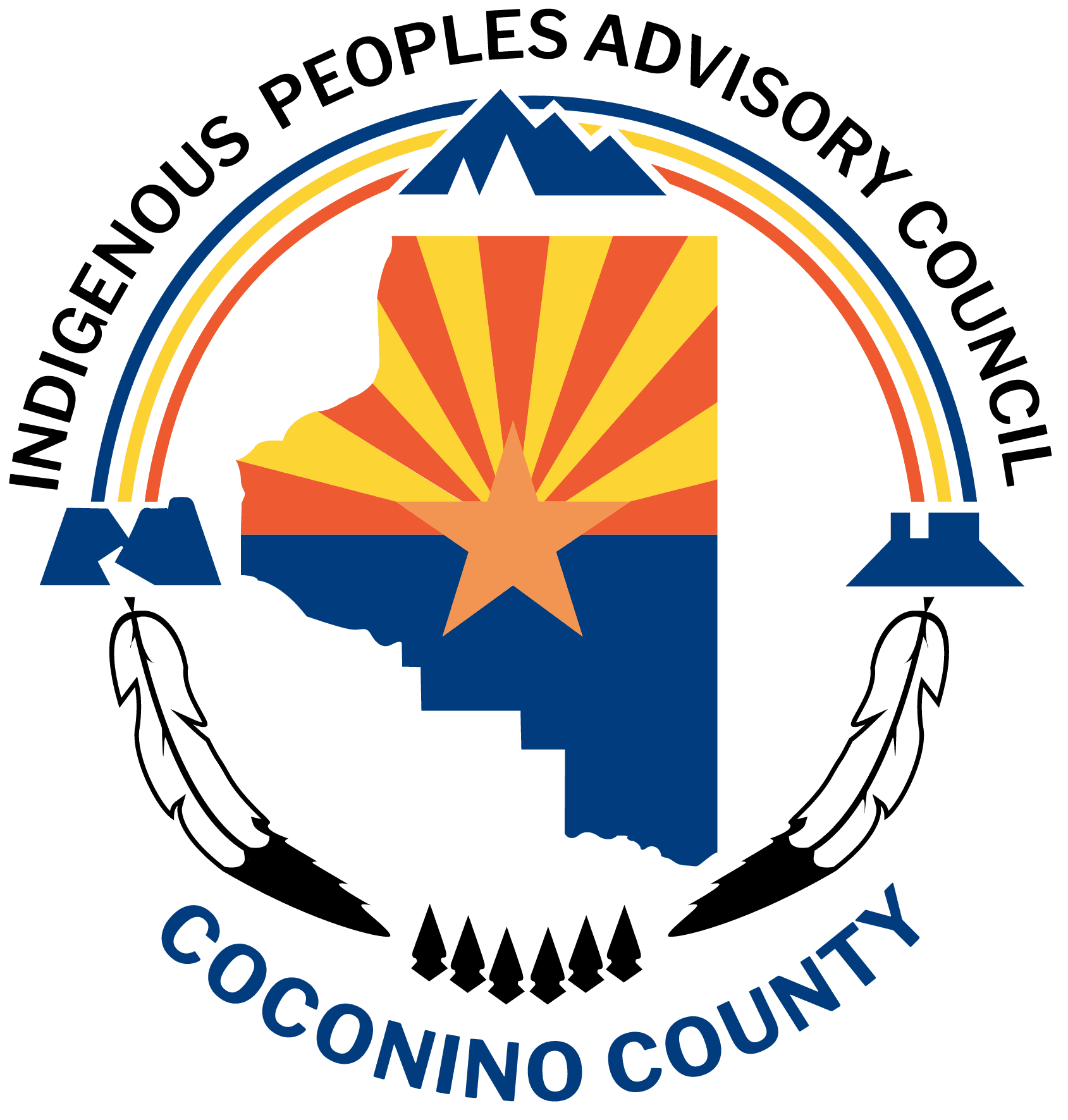 Established in 2001. IPAC serves as a liaison between Native American & Indigenous communities  and Coconino County government through collaboration with elected leaders and community members.

Diana’s profession has been in the oral health field where she has worked with city, county, tribal, state and federal departments as a clinician, educator, researcher, liaison, and consultant. She has lived in Flagstaff for about 20 years and has been a volunteer member of IPAC for about 14 years. She is also on the City of Flagstaff - Indigenous Commission. Diana, outside of her semi-retired work, enjoys trail running, reading, road trips, camping, and hiking.

Sharon Singer Doctor is originally from Kaibeto, Arizona (Navajo Nation). As a Navajo woman, Sharon is Bitterwater (maternal), born for the Edgewater clan (paternal), and maternal grandfather’s clan is Towering House and paternal grandfather’s is Manygoat. She is a three-time graduate from Northern Arizona University (NAU), having earned a master’s degree in Counseling with a Student Affairs emphasis and two baccalaureates (General Studies & Business Management).

Sharon has been employed at NAU for over 25 years and has worked for Upward Bound TRIO Program, The W. A. Franke College of Business’ Center for American Indian Economic Development, and is currently the Director, Student Life Experience with the Office of Indigenous Student Success (Division of Student Affairs).

Sharon serves as a collaborative leader to improve and enhance the university environment and support networks for Native American, Alaska Native, and Native Hawaiian students that contribute to their success. With staff support, Sharon develops, promotes and implements an array of educational, academic, cultural, social and financial programs and services for students. As a strategic member of the Student Affairs Division, Sharon contributes to and participates in specific retention initiatives and implements departmental goals consistent with the mission of the university.

Since 2002, Sharon is also involved within the Flagstaff community as an appointed member and current Chair of the Coconino County Indigenous Peoples Advisory Council (IPAC), which serves as a liaison between the Board of Supervisors and Indigenous constituents within Coconino County.

One of her pre-pandemic activities included international traveling to countries near and far (Canada, Japan, Germany, France, Spain, Italy, Australia) and hopes to one day visit Portugal.

Dorothy Denetsosie Gishie, Dorothy is Navajo, originally from Preston Mesa, Arizona. She is of the Rock Gap Clan, born for the Towering House Clan. Her maternal grandfather’s clan is Bitter Water, and her paternal grandfathers are the Yucca Fruit Strung In a Line and Edgewater Clans. Dorothy was raised as a rancher’s daughter by her parents, Lester and Zonnie Denetsosie. She has nine siblings: Zena, Verda, Rose, Ben, Benny, Dennis, Lester Jr, Serena and Devaniel.

Dorothy has been in the Flagstaff community for 33 years and has worked for 31 years with Native Americans for Community Action, Inc. (NACA) Dorothy has worked as an Instructional Aide with NACA’s then Adult Education Program; she was also a Post-Move Counselor working with Navajo/Hopi Relocatees and was an Indian Child Welfare Act (ICWA) Counselor with the ICWA Program and was also a Social Worker. As the Program Manager of NACA’s Overlook Program, Dorothy works closely with the Coconino Forest Service and 285 Native American vendors. The OL Program is an economic development project which has been in operation since 1988. It is a vending program for Native Americans who sell arts, crafts and jewelry which is authentically handmade and handcrafted.

Dorothy is a past member of the Coconino County Intertribal Council, 2004/2005 Class Member of the Flagstaff Leadership Program, Multidisciplinary Team for Coconino County, Child Abuse Prevention Arizona, Child Fatality Review Team, Family Lifeline/Parents Anonymous Advisory Board: Arizona Supreme Court and Navajo Nation Foster Care Review Board appointments. She had volunteered as a facilitator with Family Lifeline/Parents Anonymous and Navajo Cultural Presenter for Flagstaff Police Department. She currently serves on the Indigenous Circle of Flagstaff, Indigenous Commission with the City of Flagstaff, and Indigenous Peoples Advisory Council with Coconino County. During the November 2020 election, she won a seat on the Flagstaff Unified School District Governing Board. She is an alumni association member of Brigham Young University.

Dorothy has 2 daughters: Latanya and Natalia and a son, Leo Jr. She and her husband Leo Sr. enjoy traveling to roping events where her husband competes. Her two sons-in-law, Cody and JT, bring adventure to her life. She likes to hike with her daughters and enjoys being a cheerleader at her son’s Flagstaff High School football games. Her life has blossomed as a new Grandmother to Aspen Nanabah. The world is her campus, Dorothy loves to sing, read and working alongside her family with ranch work. 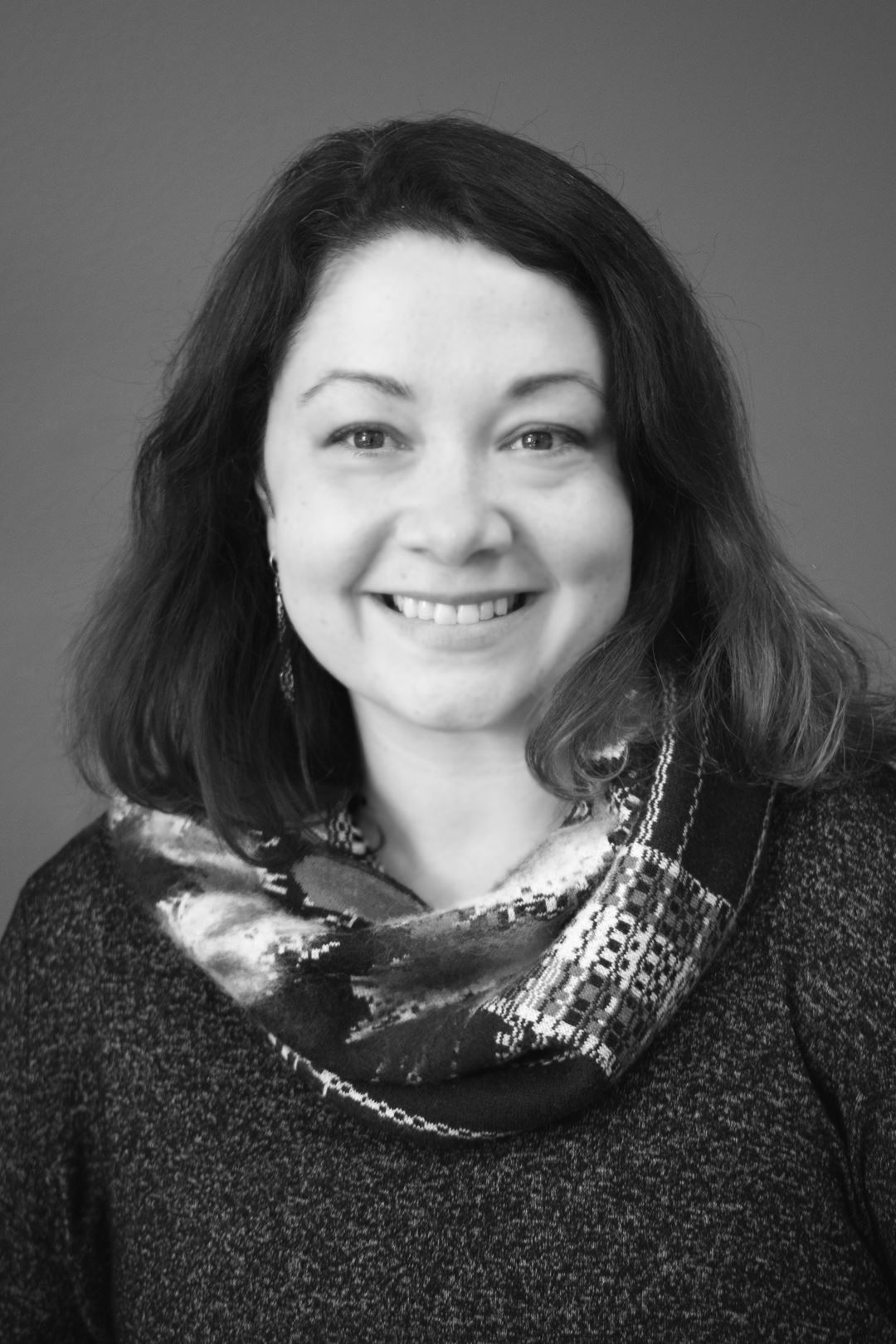 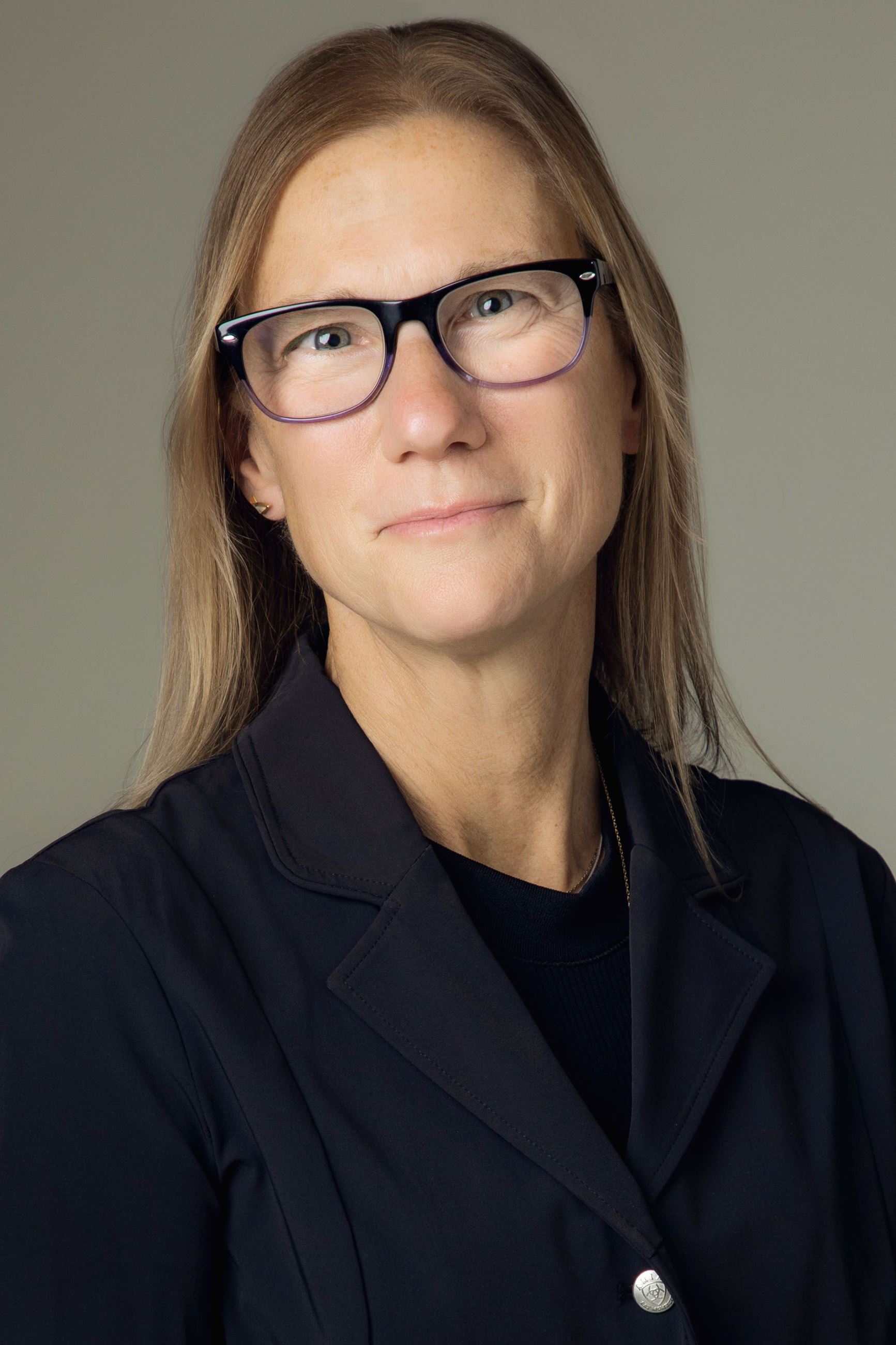 Dr. Juliette Roddy (Economist) is the James Wurgler, MD Chair of Criminal Justice and Behavioral Health within the Criminology and Criminal Justice Department at Northern Arizona University and a Northern Arizona Behavioral Health Authority Institute Transformational Fellow. Dr. Roddy has a history of offering her research and subject matter expertise to both large national institutions and small community organizations in support of evidence-based practices delivered in a cost-effective manner. She is currently funded by the NIH to study Native resilience among Arizona tribal members in recovery. Her research focus is on substance use, recovery, incarceration and re-entry and the role of housing in each of these areas. She is an executive member (treasurer) on the Board of Directors of Native Americans for Community Action in Flagstaff. She also sits on the board of Flagstaff Shelter Services and on the Indigenous Peoples’ Advisory Council for Coconino County as well as the Flagstaff Police Department’s Citizen Liaison Committee.

Julie moved from Detroit, Michigan to Flagstaff in January 2020 with her dog, Maxine. Thus far, she and Max have enjoyed every moment of their new mountain home. Julie is Ojibwe, a member of the Sault Ste. Marie Tribe of Chippewa Indians. 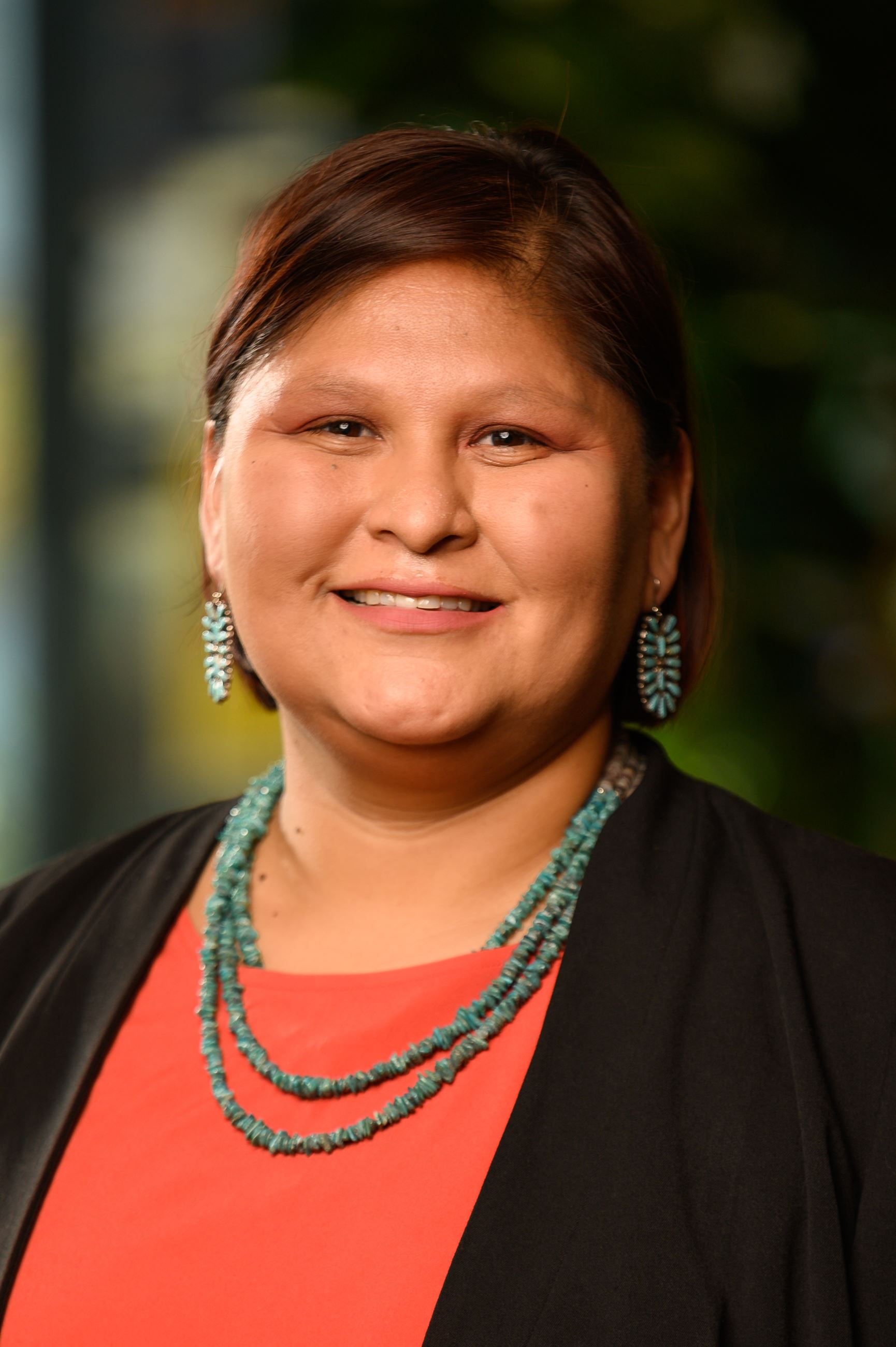 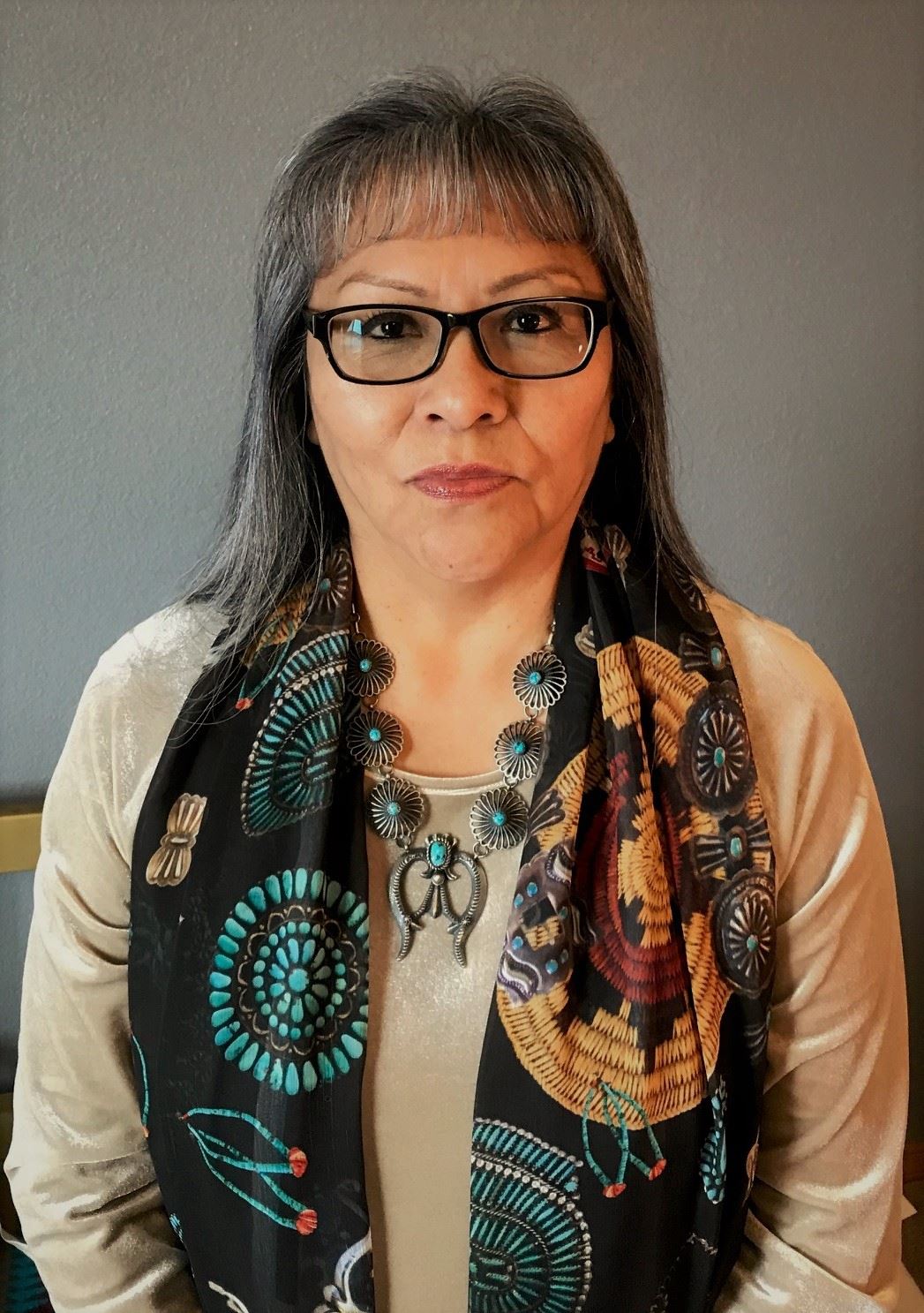 Rose is Dine’ (Navajo) and Ute. Originally from the four corners area, Rose moved to Flagstaff as a teen. She is Tachii’nii Noda’i, born for Kinlichii’nii. maternal grandfather Ashiihi, paternal grandfather Hashk'aa hadzohi. A graduate of NAU earning a Bachelor of Science degree with an emphasis in Business Administration and a minor in Psychology; she then received her master’s degree from the College of Education in Educational Psychology & Counseling.

She spent her professional work with Arizona’s School-to-Work Initiative as the NE AZ Project Director overseeing 12 school districts on Navajo and Hopi homelands. She also served as the Program Director of Workforce Development programs (both WIA & WIOA) and lead counselor for the Post-Move Relocation Program at Native Americans for Community Action, Inc. (NACA). At Coconino County Career Center, she provided workforce development opportunities for county residents. Currently, she enjoys her work at the City of Flagstaff City Manager’s office as the Coordinator for Indigenous Initiatives where her work includes advocacy at the government level and filling the gaps through collaboration efforts with city, county, and Indigenous partners. Having experience in the areas of serving people and serving in volunteer capacities has shaped her work to support those who need services to those who provide services, as well as shaping and supporting conversation on systematic change.

Her entire adult life, her passions and volunteerism have included advocacy work for Indigenous people and people of color. She currently serves on the Indigenous Peoples Advisory Council to the Coconino Board of Supervisors, Indigenous Circle of Flagstaff (a grass roots movement impacting change in Flagstaff), the National AISES Council of Elders, Flagstaff Police Department’s Citizens Liaison Committee, and other community-based committees. Flagstaff is home to Rose, her husband and their three adult sons. Rose’s mission is to make a positive impact in people’s lives and in her daily interactions.

The council is composed of volunteer members appointed by the Board of Supervisors. Members must reside in Coconino County. Members should also have an interest in and knowledge of issues and concerns of importance to Indigenous Peoples and Native Americans residing in Coconino County. One does not need to be an Indigenous person or Native American to be a member. Member terms are 4 years and there is no term limit.